If you know me, then it shouldn’t be a surprise that I’m a huge fangirl of everything awesome. I have different fandoms and I love them all equally. Sometimes I’ll have a phase where I’ll be obsessed with one fandom for a couple of months or years, and then I’ll switch it up. I guess I do it just to keep things interesting and spice it up a bit.

So you’re probably wondering: what the hell is a fangirl and what is a fandom? Well first of all, if you’re on the internet and don’t know the answer to at least one of the questions, then shame on you. But it’s ok – once you’re done reading this post, you might find out that you, too, have an inner fangirl/fanboy just waiting to come out.

Fangirl – noun
1. A rabid breed of human female who is obsessed with either a fictional character or an actor. Similar to the breed of fanboy. Fangirls congregate at anime conventions and livejournal. Have been known to glomp, grope, and tackle when encountering said obsessions.
-Credit: Urban Dictionary

First of all, that definition is a little outdated. I mean, who still uses Livejournal? (I haven’t signed onto mine in almost 6 years now.) If you used Livejournal, you were most likely writing fanfiction (like I was). Livejournal, in my opinion, was used for people in different fandoms to connect and share their love for the fandom. I’m not sure if people still use it though… It’s kinda like a Xanga now. Like, who uses Xanga anymore? That’s like using a midi file for your website in 2013.

And you know you’re a fangirl/fanboy if you’ve ever used the word “glomp” in a sentence. Remember those good ol’ times when you saw that word on t-shirts at almost any convention?! Ahh… those were the days.

In case you don’t know what “glomp” means, glomp is basically a tackle hug. Only anime fans would know what this means because most anime always has a character glomping another character. You know how some people act out what they see on TV? Yeah, kinda applies here. If you still don’t really understand what glomping is, here’s an image I found on google on how to do it right. 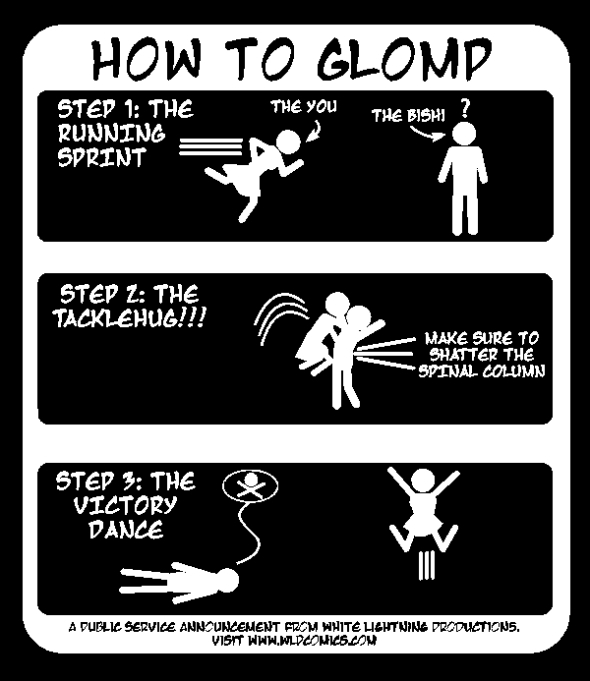 I always found it weird that not many of my friends really understood why I had so many obsessions and why I was so infatuated with the fandoms. I mean, if you find something you really love, like a sport, a book, a movie, etc., don’t you want to find out everything about it? For example, if you love basketball, don’t you want to watch ESPN and watch every highlight of everyday? Buy the games, wear the jerseys, tweet about it, tweet to your favorite player!? If you’ve done this, you can consider yourself a fangirl/fanboy. Because this is what fangirling is at the very core.

But I’d like to point out that there are different levels of fangirling. You have your extreme fangirls who sleep, breathe, eat their fandoms, and you have your mildly obsessed fangirls who don’t mind watching the series or movie over and over in the privacy of their own home but wouldn’t be caught DEAD at an event with other geeks in the fandom.

As you can see, there’s a spectrum and depending on how proud you are of your fandom, you may land differently on the spectrum than your friends.

As for me, I consider myself pretty extreme. I’m pretty vocal about what I love and I have no shame in telling people so. I go to anime conventions, I’ve cosplayed, I used to write fanfiction, I still READ fanfiction (both anime and Hunger Games), I’ve been to plenty of midnight premieres, I have a freakin’ Hunger Games tattoo, one of my sorority paddles is a Pikachu, and I follow all my idols on Twitter and tweet to them. And sometimes they tweet back! 😀

OH and I can probably quote some of my favorite Youtubers. Because I’ve watched their videos THAT much.

You can call me creepy all you want, but if you’ve already met me, I bet you didn’t know half these things that I do. I’m just good at integrating myself with society so that I don’t look like that awkward kid in the corner with no social skills. It’s definitely something I’ve had to perfect over the years. When I was a kid, I used to sing all the songs in my Rurouni Kenshin: Best Collection CD out loud to all my friends during recess.

Yeah, as if I wasn’t teased enough for being the asian kid.

So now that you know the art of fangirling, you may unleash your inner fangirl/fanboy out to the world. Let that fangirl converse with me sometime. Trust me, you’re not weird and you’re definitely not alone.

Hope everyone has had a great weekend! Happy Father’s Day to all the dads and moms out there!