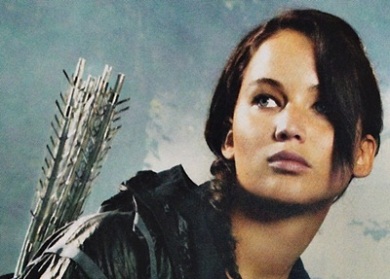 Whenever I hear the word “superhero,” I can’t help but think people are going to obviously think of some super human or mutant as the answer, like Superman, The Flash, Spiderman, etc. I’m actually a big Marvel fan (X-Men FTW!) but when I really sat down and thought about my most favorite superhero EVER… the only one that came to mind was Katniss Everdeen from The Hunger Games trilogy.

So I know she has no super powers or she’s not some sort of mutant, (well, not according to Peeta in the third book, right?! …. Too soon?) but I LOVE this character. And she’s a hero. And in my opinion, she’s pretty super. Sooo… this totally counts.

As a character, Katniss is actually pretty stoic, moody, and misunderstood by people, thus coming across as a bitch to some. But if you knew how hard she had to work in order to support her family, you’d come across that way too. She actually has a big heart and would give the world to her little sister. I mean, she volunteered on behalf of her sister as tribute. Now if that doesn’t say Sister of The Year, I don’t know what does.

I also admire her tenacity. She perfected her hunting skills all by herself after her father passed away. If you’ve ever taught yourself how to do anything, then you can only imagine what it’s like to have teach yourself how to kill animals in order to make it through another day. The strength on that girl. How do you NOT applaud that?

And when she was asked to be the face of the rebellion, I mean, she just took that role and owned it during a very difficult time in her life when all the districts were relying on her to save Panem. Not to mention that the boy she loves was brainwashed to kill her. She STILL pushed through and fought for everyone’s freedom because she knew it was the right thing to do. And it pretty much fcked with her psyche at the end of it all and mentally traumatized her. But then again, what soldier doesn’t come back from war feeling that way?

And to state the most obvious, she’s a freakin’ bad ass WOMAN! I love how Suzanne Collins used a FEMALE lead for this story. It’s so empowering and  it encourages women to stand up for what they believe in and fight for a better tomorrow.

I love Katniss and The Hunger Games trilogy so much that I got it tattooed on my back. True story. 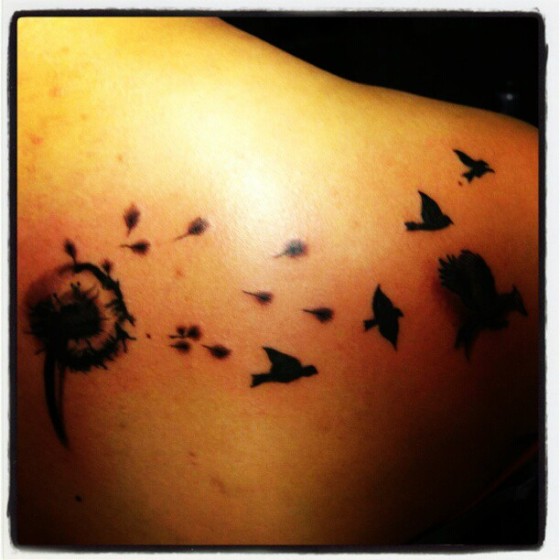 The biggest bird is a mockingjay, which is Katniss’ symbol for the rebellion. The dandelion is Peeta. 🙂

I’m planning on getting this tattoo touched up because it’s faded a bit since I got it. I’m also considering adding on an arrow to the mockingjay, but we’ll see how everything looks. I’m definitely getting this done before Catching Fire premieres in November.

Question of the day: Who’s YOUR favorite superhero?