So I’ll admit… I’m a little late on posting about this. But hey, I loved this show so much, I just wanted to share it with you guys in case you haven’t heard of it.

So let’s backtrack a little. ISA is a concert events company that focuses on showcasing rising Asian American talent from online videos. (Basically all the Asian Youtubers in one place.) Founded by the ever popular Wong Fu Productions and Far East Movement, ISA has blossomed into a popular source for Asian American entertainment on the internet.

So if you’ve ever seen any game shows from Asia, you’ll know their game shows are anything but normal. They’re loud, fun, crazy, and there’s always some sort of dancing. Well, at least in Filipino game shows anyway. I for one have always found Asian game shows very entertaining and hilarious to watch. My favorite would have to be Silent Library from Japan. 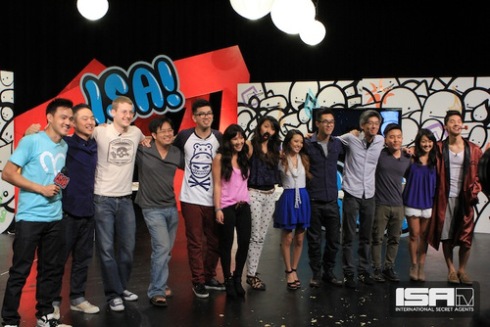 ISAtv basically wanted to create their own version of those popular game shows. If you haven’t watched it yet, you better open up a new tab in your browser and start watching it. Like seriously. I’m waiting for you to do it. Did you do it yet? Ok…. good.  All the contestants in this first episode are popular Youtubers that you might recognize. We have Wesley Chan and Ted Fu from Wong Fu Productions, David Choi, Jen FrmHeadtoToe, Ally Maki, Clara C, Freddie Wong, Brandon Laatsch, Mike Song, and Anthony Lee. Hosted by Amy Okuda and Philip Wang from Wong Fu, the contestants were put in different challenges and if they lost, well, they better be ready. Because Game Master Yoshi (a.k.a. KevJumba) was ready to punish the weak.

My favorite challenge they’ve done so far is the game called “Pass It On.” The contestants were lined up and separated by a curtain. Starting with either Phil or Amy, they acted out a phrase. The first contestant then had to act out the same phrase, using NO words, to the next contestant. Basically, if the games Charades and Telephone had a baby, this is what it would be. The last contestant then had to act out the phrase to either Phil or Amy, and he/she would guess what the phrase is. If you’ve ever played the game Telephone as a kid, you’ll know that people misconstrue messages very easily, so you can only imagine how crazy this game turned out to be. If I ever host a party of some sort, I totally want to play this game.

ISAtv’s Youtube channel currently has 3 parts up, and they’re releasing part 4 of the game show TOMORROW! Based on the preview, it looks like the contestants are going to have to go through some sort of obstacle course. Let’s hope Yoshi doesn’t subject them to more torture!

What are some of your favorite Asian game shows? Leave a comment and share your thoughts with me! 🙂