First off I want to thank you for reading my last blog post. It was the most read one I’ve done so far, so I guess that means that either A) everyone loves Maids, B) everyone loves reading about my personal life, or C) everyone loves Maids. So don’t worry, I’ve taken all that into consideration and the topic of Maid Cafes will be discussed and maybe even VLOGGED about in future posts. 😉 (I’m thinking about launching a Youtube channel… yay or nay?)

I’ve been working hard the past couple weeks transitioning from spring semester/sorority stuff to summer school, working more hours, and prepping for Anime Expo! So if it sounds like I’m busy, it’s because I am. But through all the busy work, I bear good news.

I finally have my own domain! 😀 -insert happy cheer- If you haven’t noticed, my URL address is just AliceVega.com as opposed to AliceVega.wordpress.com. I decided to just go for it because I’ve always wanted my own domain. So here I am! I’m like a new woman now.

Anyways, I wanted to do a fun topic today since it’s FRIDAY and we’re getting down and we’re looking forward to the weekend, weekend. (Get it? No? Ok…) I had the sudden inspiration to write about my favorite guilty pleasure songs since I actually was listening to Rebecca Black’s Friday song right before this.

OK so judge me all you want. I know this girl got ridiculously bagged on for having a really dumb song that went viral, but hey, she’s the one laughing at the end because she made tons of money AND got exposure. Do you know how hard that is to do that?? There’s millions of artists trying to break into the industry who will probably never get their big break but here’s this 15-year-old somethin’ that came waltzing in through Youtube and made a statement. 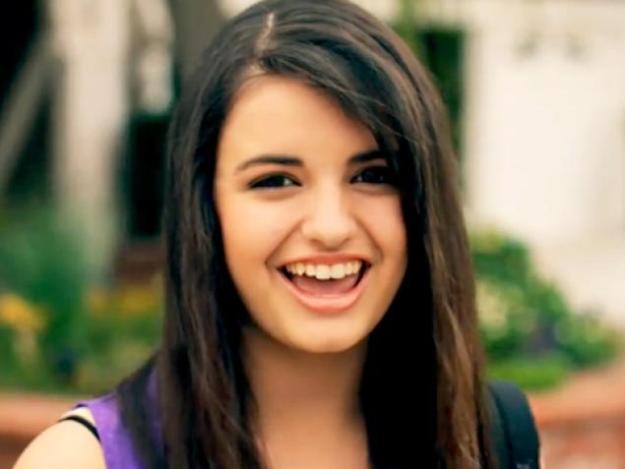 She made the biggest statements of statements. We have to thank her for letting us know that it’s Friday and that tomorrow is indeed Saturday and the day after that is Sunday.

Thank you Rebecca Black. I so excited.

Anyways, another song I hate to admit I love is Justin Bieber’s song “Baby.” Do you guys remember when Justin Bieber was just posting videos on Youtube? Because I distinctly remember that period of time and when he released this song, I honestly thought it was two different guys. Don’t ask me why, I just did. But hey, I’m a big supporter of Youtubers and as much as people hate on Bieber Fever, deep down I secretly will always support him since he was one of the lucky ones who crossed over to mainstream media.

Oh and it helps that Ludacris is featured in the song. AND he gives a Starbucks shout out. I just got 10 more cool points. Thanks, Ludacris.

Okay let’s move onto the next song. One Direction’s song “Kiss You.” Yeah, I get that this isn’t their breakout single, but this song is hella catchy. If you haven’t heard it, I suggest you open up your Spotify and listen to it. Like, even listening to the first 10 seconds will suffice. You can’t tell me that that’s not catchy! Everytime I hear this song, I tend to body roll when they sing “Yea-a-a-hhh” in the chorus. (Ok, I totally don’t know how to spell that, but you get the point.) Ooh, I know, so edgy! Body rolling to a One Direction song.

Again, I am not stopping you from judging me. And I bet now that you’ve listened to the “Yea-a-a-ahh” part, you’re body rolling to it too. Huh??

Anyways, the next song I want to talk about is a current one. You might have heard it on the radio since it’s that mainstream and catchy. It’s called “Bubble Butt” by Major Lazer Feat. Bruno Mars, 2 Chainz, Tyga, and Mystic. First of all, that combination of artists just spells a recipe for a hot mess. If you’ve ever watched the video, you know what I’m talking about. True story, I watched that entire music video just to see if any of the actual rappers (i.e. Major Lazer, 2 Chainz, etc.) made a cameo and they didn’t. So now I can say I watch that whole video in its entirety and I wish I didn’t.

But damn it, that song is SO catchy.

The last song I want to discuss is Miley Cyrus’ Party in the USA. I’m not going to say much about Miley herself since she’s had the whole world pretty much talk about her, but I will say I don’t hate her nor love her. I used to watch Hannah Montana, so I’ll just leave it at that. Hey, everybody makes mistakes. Everybody has those days, everybody knows what I’m talking about —

Are some of these your guilty pleasure songs too? I’d love to see your list. Leave it below in the comments! 🙂